Seventy birds on a beach in the middle of Dudley?

That’s the summer scene at our newly-launched Penguin Bay where dozens of highly endangered Humboldts are making the most of the sunshine. 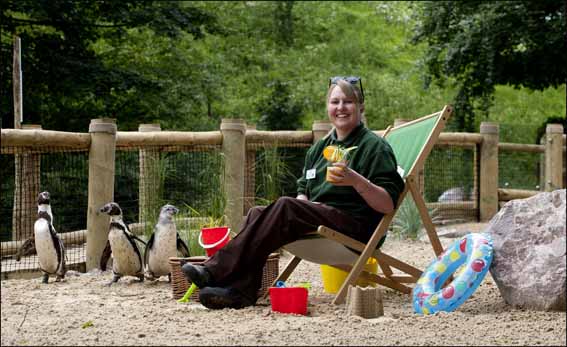 Our penguin enclosure has been turned into a walkthrough experience that has doubled the land area available to the 70-plus birds  the UK’s largest colony of Humboldts  and allows visitors to get close to the highly endangered species.   CEO Peter Suddock explained: “Penguin Bay has been designed in response to visitors’ requests to get nearer to our colony of rare Humboldt penguins and the new layout means they are able to do just that, plus have a fantastic overhead viewing platform to watch them swimming.”   Tarmac pathways and garden areas incorporated into the site have been replaced with sand and rocks, creating an authentic landscape for the penguins and decking areas and large glass viewing platforms afford close range views of the pool.   Mr Suddock added: “It’s been a fantastic success and when we get weather like yesterday the beach really comes to life, the penguins love it.”   The £40,000 project also included refurbishment of nest boxes, the checking and resealing of the pool and provision of a creche for young Humboldts.   Our highly successful conservation programme for Humboldt penguins has been recognised by the British and Irish Association of Zoos and Aquariums (BIAZA) winning its highly-prized award for sustained breeding of a captive species.

CAPTION: Team Leader Birds, Kellie Piper, takes a break on the beach in Penguin Bay, our newly-launched walkthrough experience that is home to more than 70 rare Humboldt penguins.