Eight medicinal leeches have moved into a new home at DZG. 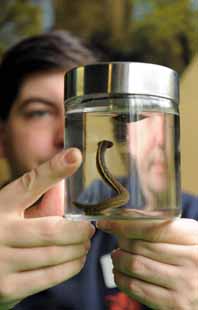 Presenter Langan Turner said: “The leeches are fascinating, but many people also find them repulsive.

“They’re approximately 20cms long and have a sucker at each end  one with sharp teeth attached! The other sucker is used as an anchor to stop the leech from falling off its prey.”

Leeches (Hirudo medicinalis) were commonly used for blood letting by doctors in the nineteenth century, but have made a comeback in modern medicine in plastic surgery to help re-establish a blood supply to affected areas, such as re-attached fingers, toes, ears and noses.

Langan added: “They coil like snakes and are alarmingly fast in attaching themselves to skin. You should never pull them off the skin as they will leave their teeth embedded; the best way to detach them is to spray them with salt.

“Thankfully, I managed to move them without incident, but transferring our newly-arrived leeches from their container to the aquarium was an ordeal I never wish to experience again!”

CAPTION: Presenter Langan Turner with one of eight medicinal leeches that are on display in the Discovery Centre.