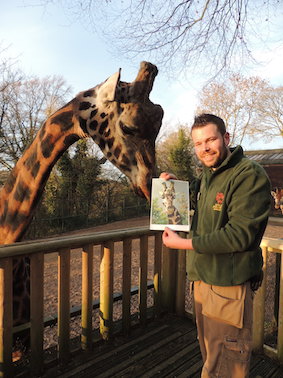 Ungulates Section Leader, Jay Haywood, was delighted to receive prints through the post of his favourite animal charge, painted by former keeper Rama Samaraweera, following a return visit to DZG.

We featured Rama, known as Sam, last year after he donated four original oil paintings to DZG as a thank you for the attraction being his muse! 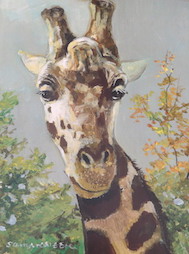 Sam, aged 89, was fired from the zoo in 1962 after spending too much time drawing the animals than mucking them out, but turned his then-hobby into a career by becoming an acclaimed wildlife artist.

And following a VIP visit when Sam met some of our keepers and animals, he put his paintbrush to canvas again in his Mid Wales studio and produced a stunning portrait of Kubwa for Jay, who was his tour guide for the day.

Jay, pictured right showing the portrait to Kubwa, said: “It was great to meet Sam and hear about zoo life when he worked here.

“We organised a giraffe feed as part of his VIP tour and I told him how the giraffes were my favourite animal at the zoo, so I was delighted to receive 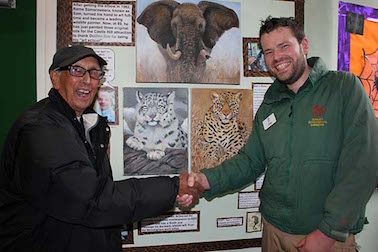 “They look really good and my copy will take pride of place up on the wall in my house, while we’ll hopefully also add one to the giraffe house for visitors to see too.”

Sam painted Kubwa from photographs taken during his visit by his nephew Phil Brooks, Head of Photography at Dudley College, who accompanied him on his tour.

Visitors can see Sam’s donated original artwork – an elephant, a snow leopard, cheetah and tiger  in the Discovery Centre.