A cheeky kangaroo, named Harold, makes sure keepers know it’s time for tea  by knocking at the kitchen window! 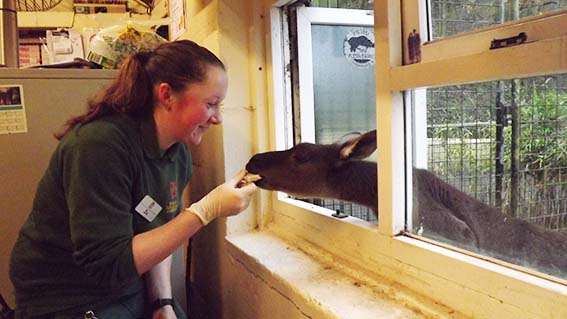 The 13-year-old Western Grey, who lives in the paddock alongside the ungulates kitchen with his sidekick, Lou, has started to knock at the window to remind staff it’s feeding time.

Keeper Jo Turner, pictured above, said: “You can set your watch by Harold; around 4pm he’ll hop up to the window and bang it with his paws until we open it. It’s quite amusing to see.

“He’ll then put his head through the gap as far as he can lean until we give him a fuss and a treat, which is usually a bit of bread, before we go out and feed them both their supper.”