Head of Birds Kellie Piper had a belated birthday surprise when an unexpected gift was left for her by a mystery DZG visitor.

Kellie (pictured right), who had taken time off to celebrate her 32nd birthday, was delighted when she returned to work and found the present  a book called H is for Hawk.

Now Kellie, who has always wanted to read the story about a womans experiences of training a young goshawk, would love to be able to thank the kind person who left it for her.

Kellie said: At first I was surprised someone had bought a gift for me but it was a very kind gesture and Im very grateful.

I would love to thank whoever it was for being so thoughtful and would like them to know I’m really touched. 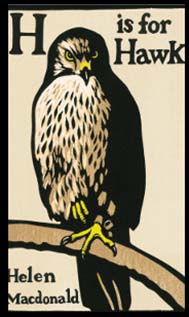 H is for Hawk is a memoir by British author Helen MacDonald.

The book tells Helen Macdonald’s story of the year she spent training a goshawk in the wake of her father’s death. Having been a falconer for many years, she purchased a baby goshawk to help her through the grieving process.

To the very kind person who bought the book… A big thank you from Kellie!