Keepers relied on true grit when heavy rain washed a mound of soil into the penguin enclosure.

Curator Matt Lewis explained:?”Seventy pairs of penguin feets were transferring the earthy deposit into the pool which made the water very murky and threatened to spoil visitors’ enjoyment of the enclosure.” 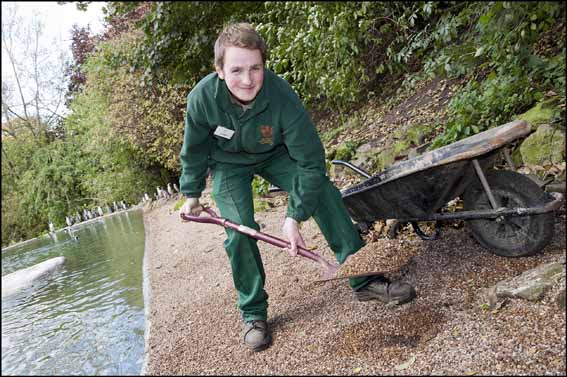 Keeper Luke Millar shifts some of the three tonnes of grit into the Humboldts enclosure after heavy rain washed the mound of soil into Penguin Bay.

Keepers shifted a whopping three tonnes of grit into the area, dispersing it by the barrowload to keep the walkthrough area as mud-free as possible.   Matt added:?”The muddy water wasn’t bothering the penguins, but visitors were unable to see them catching fish in the pool.   “It was hard work, but now the penguins can keep their feet clean and our visitors can enjoy their antics in the pool.”   Penguin Bay, which launched this year to mark the zoo’s 75th anniversary, has become one of DZG’s most popular attractions, allowing visitors to get close to 70-plus rare Humboldt penguins  the UK’s largest parent-reared colony of this endangered species  via glass viewing panels within the walkthrough experience.   DZG’s Humboldt penguin colony was established in 1986 and has gained awards for its conservation and breeding programme of the species, which originates from South America.