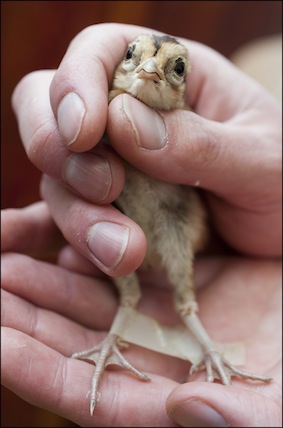 Staff noticed the tiny chick had splayed legs shortly after it hatched and was struggling to walk.

Senior Keeper, Ben Vanes, said: “We taped the bird’s legs together using medical tape and then kept it under a heat lamp in the nursery pen, where we could keep a close eye on it.

“Its legs were strapped for five days until they had strengthened and straightened and it’s doing really well now. We’re still caring for it, but if we’d have left it without intervening, it wouldn’t have survived.”

Elliot’s pheasants are native to the forests in China.

They are polygynous birds, with males having two or three mates.

Males also play no part in nest building, incubation or rearing of chicks.