DZG’s two male kangaroos have bounced into a bigger bachelor pad on site. 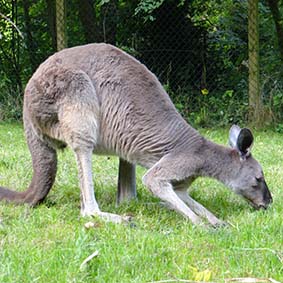 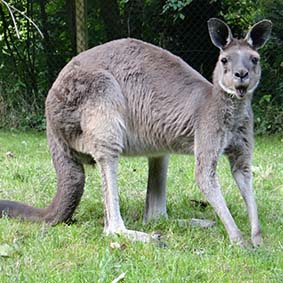 Western greys Lou and Harold (pictured) – named after the old pals from the Aussie soap Neighbours – have a larger space and natural grazing land in their new enclosure.

Section Leader Jay Haywood said: “The internal den in the new enclosure had to be modified for the kangaroos to make it more suitable for their needs.

“We had to raise the door levels and put in draught excluders but it is all set up for the friends now and they are very happy in their new abode.”

Twelve-year-old Lou and Harold, aged 13, both arrived at Dudley from Chester Zoo in April 2006.

They’ve moved from the paddock alongside the ungulates kitchen into the enclosure that used to house our much-loved babirusa, Nick.

The 18-year-old Balinese wild pig – known affectionately by keepers and regular visitors as Nick Pig’  had reached a good age but sadly died last month after a short illness.

Keepers now plan to use the former kangaroo enclosure to extend the paddock for the zoo’s seven capybara  the world’s largest rodent  and our three adorable tapirs.

Male Western grey kangaroos are known as stinkers’ due to their strong curry-like smell!