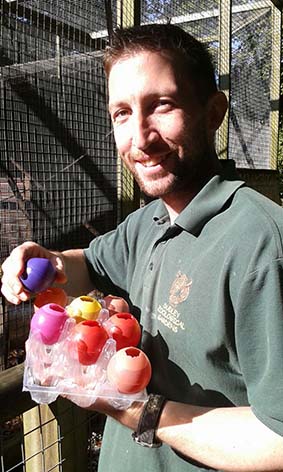 He said: I cut the tops off the balls and filled them with jelly.

“Once they were set I threw them up to the top of the capuchin enclosure and it didn’t take them long to figure out how to get to the jelly. They absolutely loved it!

Yellow-breasted capuchins are highly social and intelligent monkeys which live in groups of up to 30 individuals.

They spend most of their lives in trees where their grasping primate hands and prehensile tail help them move throughout the rainforest. 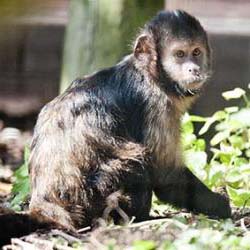 Groups are active by day and forage through their forest range feeding on fruit, nuts, flowers, invertebrates and small mammals.

Females give birth to a single youngster after a gestation of 180 days.

It is now thought that just 300 individuals survive in the wild, making the species among the world’s most endangered primates.

Previous: Batty about smoothies!
Next: Bear in mind shes 35!