We’ve had a fang-tastic start to our Freak Week, plus another first in our 80th anniversary year following the birth of five Jamaican boas. 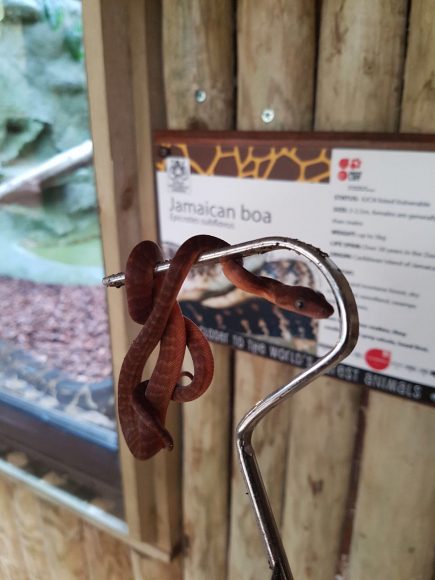 The babies were born to parents Bob and Marley in the Reptile House.

Senior Keeper, Sam Grove, said: “In the wild the parents don’t live with the babies and would leave them immediately to fend for themselves.

“We’ve removed the youngsters from the enclosure as they wouldn’t have survived.”

The babies, which measure around 30cm in length, are currently off show and are being cared for by reptile keepers.

Listed as vulnerable on the IUCN Red List, our pair form part of an EEP breeding programme.

Twenty-year-old Bob came to DZG in 2014 from West Midlands Safari Park, before being joined by 10 year-old Marley, from Knowsley Safari Park a few months later.

The Jamaican boa, is as its name suggests, restricted to the island of Jamaica.

Did you know, although Jamaican boas produce eggs they never lay them. After mating the female retains the fertilised eggs in her body for 6-7 months; the time taken for the young to develop. This process is known as ovoviviparity.

Once they have absorbed the yolk sacs of their eggs, the young snakes hatch inside the female and are then born fully formed, with the female potentially giving birth to up to 40.

Previous: Stickers and critters!
Next: Kubwa’s up for birthday breakfast!