DZG primate keeper Jade Reddall is more than half way through her month-long mission to help wild baboons in South Africa  and is loving every second of it! 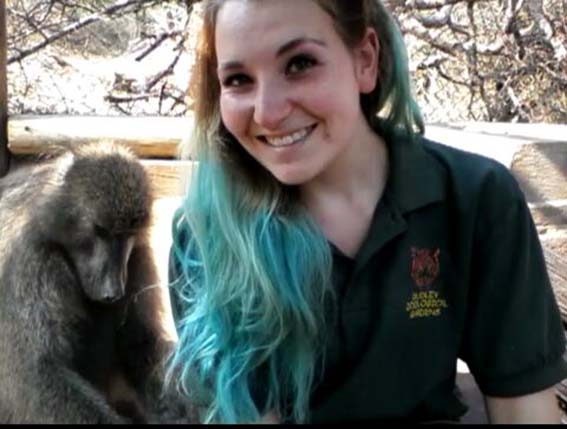 Jade, pictured above with elderly female baboon Patats, sent us some of her wonderful pictures of rescued chacma baboons from the Centre for Animal Rehabilitation and Education (C.A.R.E.) in Phalaborwa where she is volunteering.

The 25-year-old keeper, from Willenhall, spent a year planning the trip and DZG backed her, giving her paid leave and donating tools and stationery for her to take out there.

She is just over two weeks into her stay at the specialist rehabilitation centre which was established in 1989 by Rita Miljo, who tragically died in a fire there in July 2012. The centre now has a dedicated director and progress is being made to rebuild the facilities.

Most of the animals at C.A.R.E. are babies, orphaned after their mothers were shot, trapped, poisoned, or otherwise killed, usually by humans. 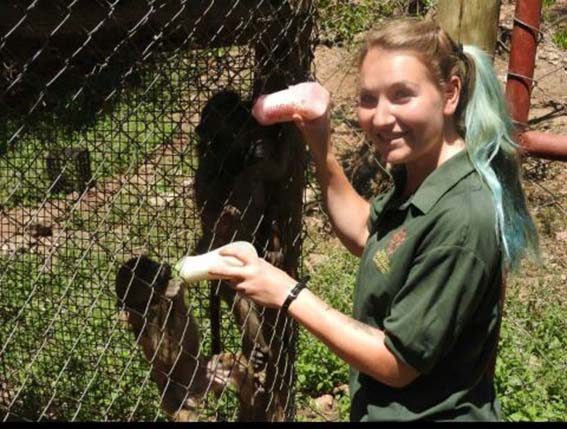 Jade said: “I am fully settled into the routine at C.A.R.E now and am comfortable with all of the baboons and the jobs we do on a daily basis, although the weather is 40 degrees so certainly not something I’m used to in Dudley!

“There is a wild troop of approximately 65 baboons that inhabit areas around the centre and currently 12 orphaned babies that need our care and attention.

“Eleven of these babies have been introduced to a surrogate mum’ baboon and live in an enclosure next to a female troop, ready for them to be fully integrated. It’s our job to care for them everyday and offer them their bottles of milk. 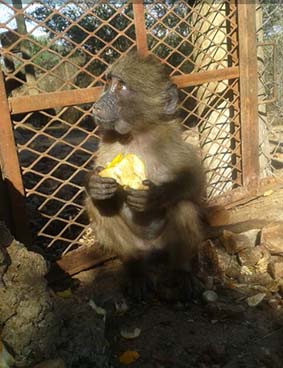 “The other baby is a little girl, about six months old, called Malila (pictured right) who only came to the centre just over a week ago and is in the nursery enclosure where we encourage youngsters to develop their natural behaviours, climbing and balance skills.

“I have shifts in the nursery and it’s always really fun to see Malila growing in confidence, climbing and socialising with other baboons.”

Other jobs Jade does include cleaning enclosures, preparing and handing out bottles for the babies and giving enrichment for the troops and the few sanctuary baboons.

She said C.A.R.E tried to release all rescued baboons back to the wild after rehabilitation, but there were currently five that could not leave due to individual circumstances.

One, an elderly female baboon named Patats, was rescued from a witch doctor where she was kept in very poor conditions for them to harvest her faeces. Her poor upbringing makes her unsuitable for troop life.

Jade said: “Despite her lifetime of neglect, Patats is a very friendly baboon and captures the hearts of everyone that knows her story. Volunteers socialise with her daily as she loves to groom and be groomed in return!

“Overall my time so far in South Africa has been more than I could have imagined and I am loving every second of it!” 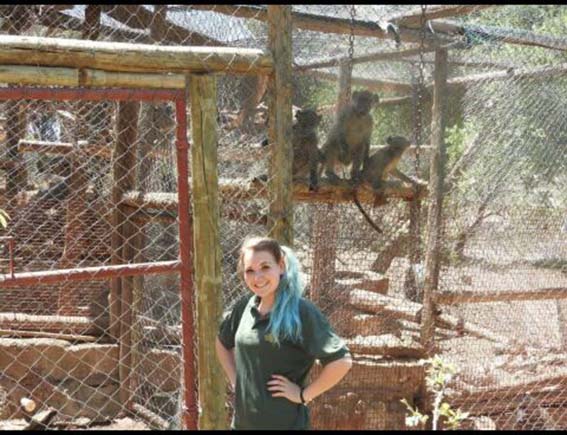 ABOVE – Wild about her time in South Africa – Jade with baby baboons Georgia, Issac and Kat

C.A.R.E is located within a beautiful game reserve and Jade has seen lots of other wildlife including elephants, giraffes, vervet monkeys, warthogs, bush bucks, impala, crocodiles and many bird species.

She chose the trip as baboons are her favourite animals. In July 2014 she was the first keeper to discover Billie – Dudley Zoo’s first gelada baby in its 78-year history  and she adores him.

Great to hear from you Jade – glad you are doi

Previous: Tortoises have a ball!
Next: Arty animals