Seeing her beloved geladas in Ethiopia and watching chimpanzees and gorillas at home in the Ugandan rainforests was a dream come true for Senior Primates Keeper Jade Reddall. 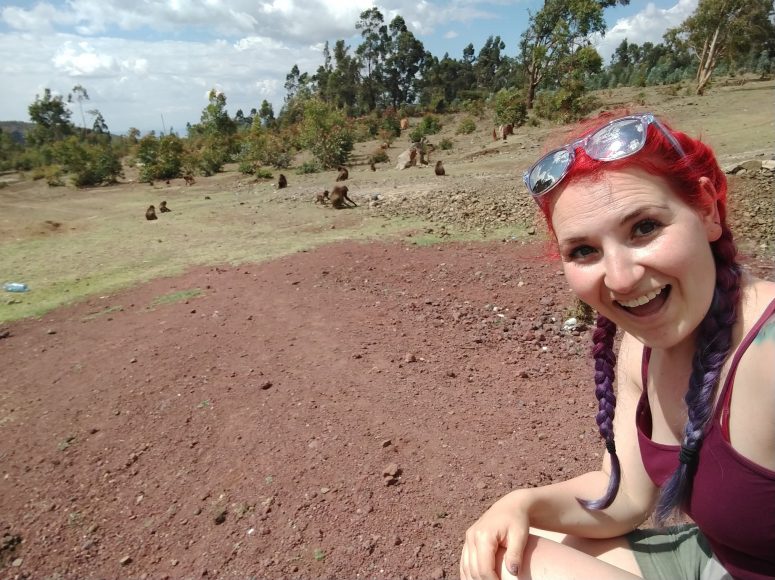 Our self-confessed crazy gelada girl, Jade, took part in a jam packed 12-day Zoo Keepers tour to Africa, travelling to Uganda, Rwanda and Ethiopia with a group of ten fellow UK keepers, meeting its wonderful wildlife along the way.

We take a look through her amazing photo album…

I froze for a bit when I first saw them just outside a village at the roadside, as I couldn’t believe I was seeing so many – there were literally hundreds in a troop. We saw three sub-troops in one big group as we spotted three dominant males with lots of females and babies.

They were so vocal, so we heard them before we saw them and we stood still to listen for a while, before heading in the general direction of the noise.

It was incredible seeing them in the wild. They were a lot smaller than our geladas here.

We also flew into Addis Ababa airport which was special, as that’s the area one of our females here is named after.

We trekked through the Kibale National Park in Uganda, ducking and diving through all the branches, as we were told there were 1,450 chimpanzees in the area.

Trackers go ahead to find the chimps first and then make contact with the guides leading us with a special whistle call when they find them.

I was so nervous when I first heard the chimps calling and my heart was pounding out of my chest, because of working with our chimp girls here and knowing exactly what they’re capable of.

The scariest part was hearing lots of chimps calling but only seeing a few and knowing there were obviously others in the trees above, which we couldn’t see, but they were watching us.

We followed a group of males. This big male pictured was the Vice President and he was with a few younger males, with youngsters in the trees above.

When we arrived they were feeding up in the trees and were making happy breakfast calls. They then come down to rest on a log before going back up to feed.

We split up into small groups for this rainforest trek, as there were lots of different family groups in the same rainforest. We saw a family of 11.

This was the old silverback, Rakumu, and he was so chilled. Funnily enough, I wasn’t scared to see these considering they are way bigger than chimps, as there was such an air of calm throughout the whole forest. It was so quiet and still and an incredible experience.

The trackers are so knowledgeable and although there is no physical interaction between them and the animals, they do make noises of reassurance towards each other, which was amazing to witness.

It was so exciting to see all the wildlife in their native home and we were lucky to see so many different species, especially so many primates, so I was in my element!

However, one of the animals which really excited me was seeing a Shoebill – we were told it was really difficult to spot these birds and we saw one on our first day, so I was really chuffed and messaged our bird keepers here to tell them!

This was an amazing project we visited that I’m hoping we can support in the future, called Lake Katwe Sub-County United Bee Keepers Association, who carry out remarkable work with bees.

We met the whole committee, some who had travelled miles and miles to see us and tell us how they’ve installed thousands of bee hives around the national parks, which not only act as a natural animal management barrier, especially against elephants entering the villages, but it’s also a way to make money for the local residents with the production and sale of honey.