A former Dudley Zoo keeper who hand-reared our oldest penguin Pingu has sent an adorable snap – just in time for the bird’s 27th birthday today. 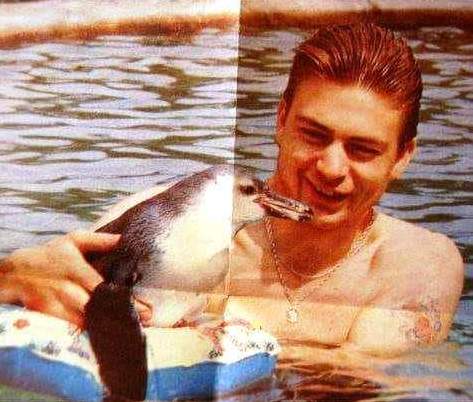 Ex-employee Lee Butler forwarded a photo of a press cutting from 1991 when he was in the penguin pool with baby Pingu.

The popular penguin – one of the oldest in the UK – is pictured wearing an inflatable as Lee introduced Pingu to the water and the rest of the Humboldt group.

Lee got in touch after seeing a recent video of Pingu in the snow on Facebook. Shown below, it was taken by DZG Head of Birds Nicola Wright this March.

He said he thought the current bird keepers would enjoy sharing the memory and said he still recalled how cold the water was.

Nicola, who has been at Dudley Zoo for 13 years, said: “It’s so nice to see an animal I work with now as a youngster.

“It was also interesting to see how differently things were done almost 27 years ago. I’m just glad I don’t have to go swimming with any of our colony!” 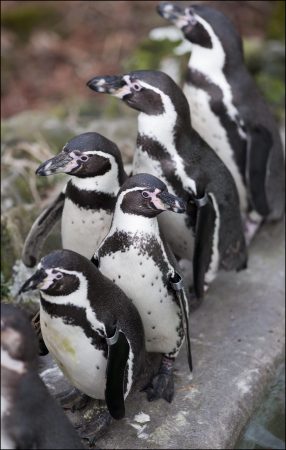 And tomorrow is World Penguin Day when we’ll be celebrating all 69 of our wonderful black and white aquatic birds.

Pingu is a very special member of the colony as he was one of five hand-reared chicks which the breeding programme started with back in 1991.

The programme, which scooped a prestigious BIAZA conservation award ten years ago, was headed by our now Zoo Manager Matt Lewis who even slept in the penguin aviaries to give newly-hatched chicks round-the-clock feeds.

Today the Penguin Bay colony continues to go from strength to strength and Pingu’s relatives have gone on to start Humboldt groups at other animal attractions across the country.

Humboldt penguins (Spehiscus Humboldti) are native to South America and named after the cold water current in which they swim. The species is vulnerable due to a declining population caused by over-fishing and habitat destruction. They can live up to 20 years-old in the wild and up to 30 years in captivity.