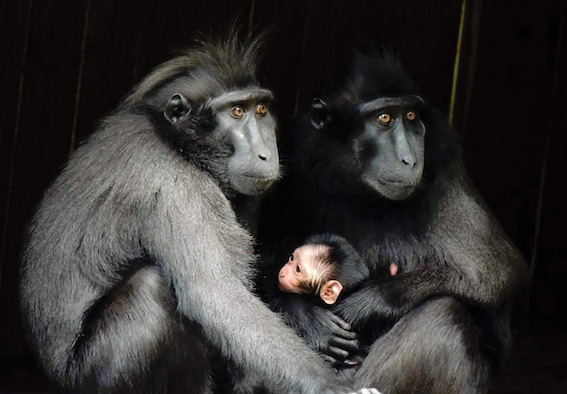 There are more than 20 species of macaque across the globe  making them the most widely distributed genus of non-human primates. 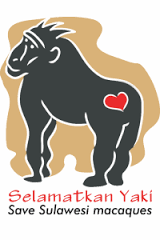 Here at DZG we hold Sulawesi-crested macaques, who are classed as critically endangered on the IUCN Red List  threatened by extensive habitat loss due to farming and deforestation in their native Sulawesi in Indonesia, as well as the illegal bush meat trade and the pet trade.

We’re also proud supporters of Selamatkan Yaki – a Sulawesi crested macaque conservation, research and education project in Indonesia and have raised money for their cause through staff quiz nights and visitor bucket collections, as well as participating in a Three Peaks Challenge.

Today we’re joining forces with ten macaque conservation organisations  including Selamatkan Yaki  as well as other zoos around the globe to highlight the plight of the primate species.

Visitors can discover more about macaques and the awareness event by taking a look at the display board in the Discovery Centre, compiled by Presenter Dorrie Hall, pictured below, where there’s also macaque colouring-in sheets for our younger visitors to complete. 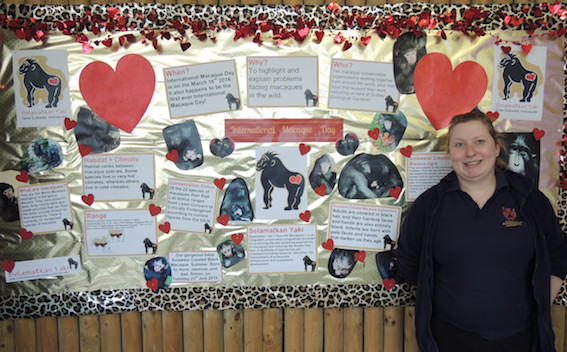 Leading the campaign for DZG is Senior Primates Keeper, Jodie Dryden, who is well-known for her love of macaques! 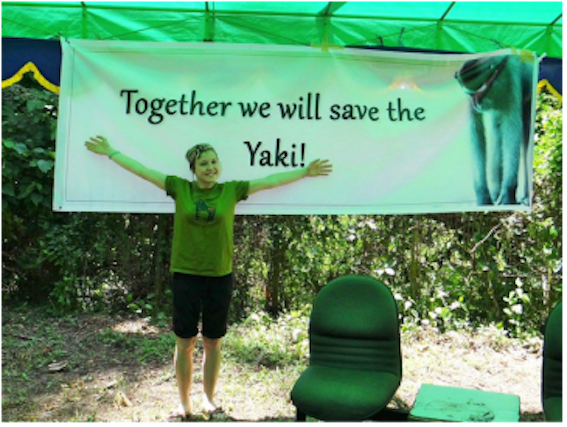 Jodie, pictured above, who is the UK Regional Co-ordinator at Selamatkan Yaki, said: ” I love Sulawesi-crested macaques and love the land in which their habitat exists. The species is complicated, fascinating, social and intelligent. 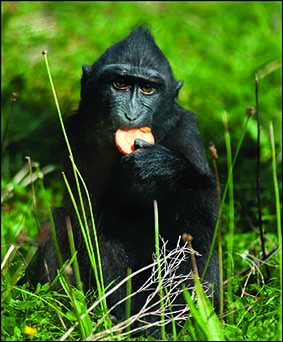 “But shockingly their numbers have reduced by 90 per cent over the last three decades, so I hope people will take the time to stand and watch, listen and learn!”

And Jodie will be flying out to Sulawesi in three weeks time to work alongside project volunteers and macaques at Salamatkan Yaki.

We’ll be following her progress and will be posting updates online throughout her mission.

Sulawesi crested macaques, also known as Celebes macaques, are striking in appearance with their jet-black hair, distinctive pink heart shaped bottoms and a large mohawk on top of their head!