A new face in Rabbitworld has gone unnoticed by residents.

Freddie the Scarecrow has sprung up in the centre of the enclosure just in time for Easter, and although he has attracted attention from visitors, giant rabbits, Paul and Ringo, have remained unfazed. 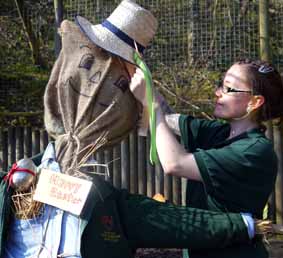 Trainee Keeper, Clare Westwood, who was one of a team of Farm staff who helped design Freddie, said: “The rabbits are not bothered by him at all; it helps that he is dressed like one of us!”

The scarecrow, which is stuffed with straw and dressed in an old zoo keeper’s uniform, is part of a newlook Rabbitworld, which will incorporate a country garden theme.

Clare added: “The scarecrow is named after Freddie Kruger because he frightened everyone in the office when we were making him!”

CAPTION: Trainee keeper, Clare Westwood, adjusts Freddie the Scarecrow’s Easter bonnet which crafty keepers have made for him to wear during the holidays.

Join the Easter fun at DZG

From Saturday, March 31 to Sunday, April 15 there’s a chance to take part in our Easter Trail with a free chocolate rabbit for all completed entries. You can also enter our prize draw to win a giant English rabbit adoption!

Come along on Easter Sunday wearing an Easter bonnet and enter our free parade, taking place in the Castle Courtyard at 1.30pm. All participants will receive a medal and the winner of the best bonnet will receive a Farmyard Meet & Greet.

Story and pic by Suzanne Jordan