Five hundred freshers visited DZG to discover how a modern zoo uses IT.

The computing, telecommunication and network students from Birmingham City University spent a day on site finding out about the numerous ways we use IT and were briefed by DZG CEO Peter Suddock, before being challenged to come up with potential new ways where technology could be implemented. 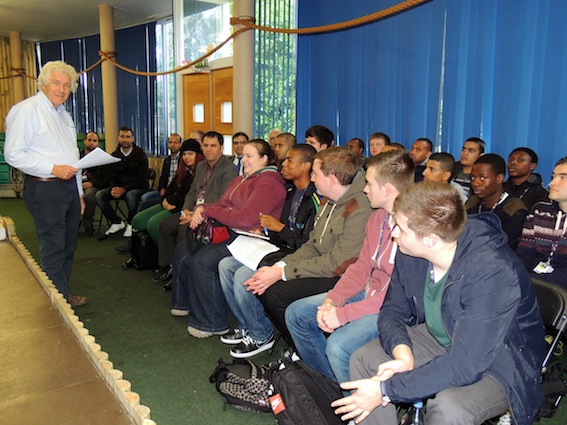 DZG CEO, Peter Suddock, said: “I spoke to all the students about how we use IT here, through the website, social media and accounts, as well as explaining how we have to have wireless and fibre optic connections across the site.

“I also told them about some of the challenges we have to overcome, such as an 11th century castle blocking out signal and Tecton buildings that can’t easily be wired up with cables, as they can’t be drilled through.

“The students were coming up with some great ideas, so I’m looking forward to reading their proposals for new technological ways which we could hopefully implement here at DZG.”

Associate Head of School of Computing, Telecommunications and Networks, David While, said: “The students had a great day spotting some of the IT already in use, such as electric fences and web cams.

“Our aim was to get them looking at how technology is used in a real life environment; but in a business where you wouldn’t expect there to be much technology and then propose a new technological recommendation for the zoo, which could be realistically implemented.

“We’re looking forward to working with DZG over the next few months on the project.”