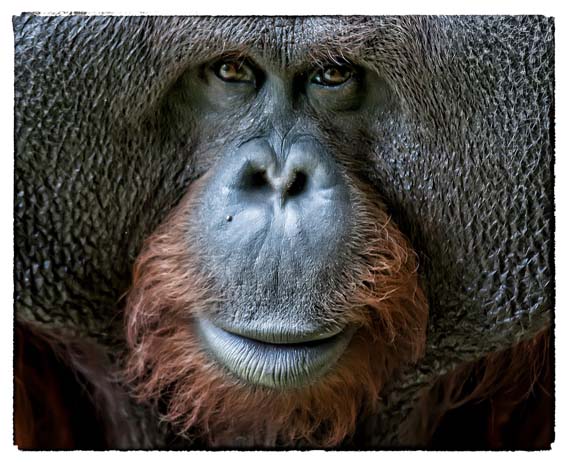 And International Orang utan Day is also chance for DZG to highlight the major threats facing these magnificent great apes in the wilds of Borneo and Sumatra where their population has decreased by up to a shocking 50 per cent in the last decade.

Great ape experts are now predicting possible extinction for wild orangs in the next 20 years. 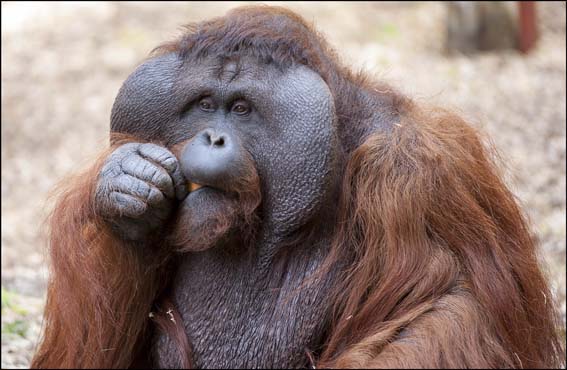 Today at 1.45pm, DZG presenters will be giving a special talk at the orang enclosure where they will introduce our charismatic four – including Jorong pictured above and Benji below left – and highlight major threats, including poaching, forest fires, logging and habitat destruction. 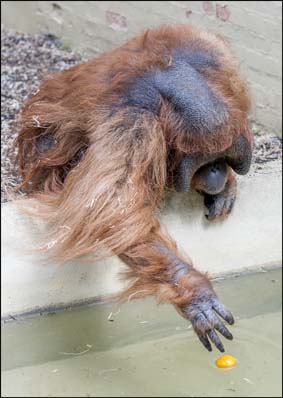 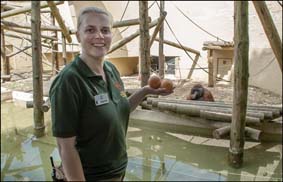 ABOVE: Senior Keeper Sophie Dugmore gets some treats ready for our four Bornean orang utans

Well be giving them some enrichment activities throughout the day, including cardboard boxes to explore and paper sacks with bottles of squash concealed inside.

Young visitors can also take part in an orang utan themed trail around the zoo, with trail sheets being handed out in the Safari Gift Shop.

An orang utan display board will offer detailed information in our Discovery Centre and we have specially designed colouring sheets in there and down on the Farm too.

Hope you can join us for International Orang utan Day!

To recognise the most iconic victim of the palm oil industry, International Orang utan Day has been set for August 19th – every year!

This event is to help encourage the public to take action in preserving this amazing species.

From 1992-2000, the population of the Sumatran orang utan is considered to have declined by more than 50%. Its relative, the Bornean orang utan population fell nearly 43 percent in the past decade, from 35,000 in 1996 to 20,000 in 2006. Since these studies were done, deforestation rates have continued to climb which means the actual populations could be well below these.

Something has to be done to save these creatures and that is the reason for International Orang utan Day!

Previous: I do and off to the zoo!
Next: DZG stars in Lenny film