A bouncing baby mara born in November has been identified as a female and named Martha. 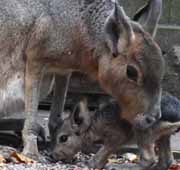 The offspring of Olivia and Martin, she is the first Patagonian mara to be born at the zoo in seven years.

Assistant Curator, Richard Brown, said: “Martha was microchipped during the sexing procedure and is now back in the enclosure with her parents.

“Maras are rodents with very long legs and tend to buck and bounce around everywhere.

“They are considered to be a near-threatened species, which means numbers of maras in the wild are being monitored regularly by conservation experts.

“If numbers dwindle further they will be re-classified as a threatened species.”

In the wild maras are hunted for their skins, which are used for bedspreads and rugs.