We’ve discovered our baby rare yellow-breasted capuchin is another boy and has been named Archie. 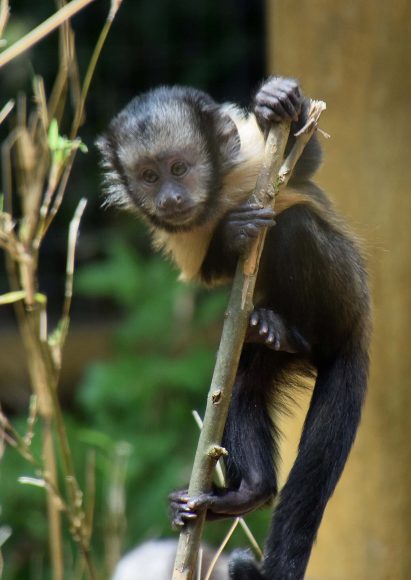 He’s the sixth baby to be born at DZG since we introduced the critically endangered species in 2011 and they’ve all been male!

The youngster was born on March 31 to 13 year-old mum, Dinya and nine year-old dad, Willow, just days after the primates moved into their new £25,000 home – and is pictured above by visitor, Karen Edwards.

Keepers were this week able to sex him properly.

Upper Primates Section Leader, Pat Stevens, said: “Archie is starting to gain confidence and has started to come off mum’s back, although he only does it when you’re not looking and as soon as we do look he dives back on again!”

The declining yellow-breasted capuchin faces serious extinction threats due to deforestation and being hunted for meat and the pet trade.

Our group is part of a European Species Survival Programme (ESSP) and remain the property of the Brazilian government.