Makalu is jumping for joy at celebrating his first International Snow Leopard Day! 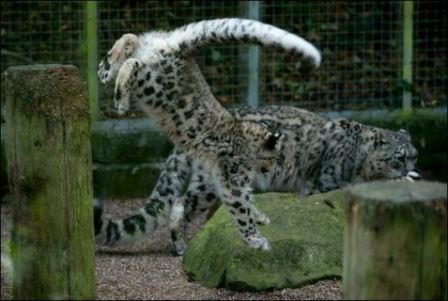 Our bouncing baby boy, born April 17 to mum, Nanga and dad, Margaash, is continuing to enjoy his explorations of the outdoor enclosure since keepers introduced the family together for the very first time earlier this month and was really excited to hear what day it was today when keepers arrived this morning!

International Snow Leopard Day has been celebrated around the globe on October 23 since 1981 and aims to raise awareness of the enigmatic big cat species, which is listed as endangered on the IUCN Red List and is facing a very uncertain future.

DZG Big Cat Keeper, Sarah Evans, said: “Snow leopards are hunted for their beautiful and highly prized fur. They’re also being killed for their bones and they’re losing their remote Central Asian mountainous regions from the rapid growth of the human population.

“Makalu, Nanga and Margaash are very special to DZG and we’re very proud to be playing our part in helping the conservation efforts for the species.”

Last year DZG donated £250 to the Snow Leopard Trust from an  increase of sales of snow leopard cuddlies purchased following the sudden death of Nanga and Margaash’s first cub, Nidara.

Keepers also raised £113 for the same cause in memory of the baby cat by taking part in a charity football match.

Sarah added: We’re delighted with Makalu’s continuing progress; especially how the three of them have settled back in together like they’ve never been apart.

“Makalu loves being outside and has already chosen his favourite platform to lie on, just like his dad, although he still enjoys playing games and having a snuggle with mum!”