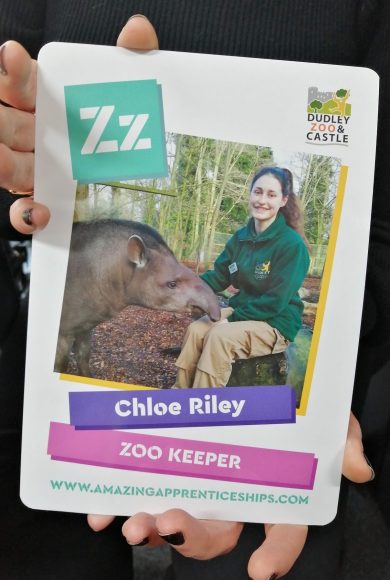 The limited edition ‘The Apprenticeship A-Z of Women at Work’, includes a pack of 26 flashcards featuring apprentices in a wide range of industries, and stars our very own Zoo Keeper apprentice, Chloe Riley, as the last card in the pack ‘Z’.

The resource which is heading to schools throughout the UK has this week been launched by Amazing Apprentices to coincide with today’s celebration of achievements of women and also includes a detailed case study booklet highlighting the women’s apprenticeship story, including Chloe’s, who is currently undertaking a work-based animal care scheme run in conjunction with KEITS Training Services.

Assistant Curator Jay Haywood, who heads our level two on-site apprentice scheme, said: “Apprentices have played an integral role in our workforce for many years with a number of our staff starting out on similar paths.

“We’re honoured to be asked to take part in this project. Zoo Keeping is a tough and physical occupation, but is no longer seen as the male-dominated industry it once was.

“The first female keeper to join Dudley Zoo was back in 1939 when five male keepers were called to service and today our female keepers outnumber their male counterparts by more than 80 per cent.”