Keepers are hoping to get the inside story on the behaviour of rare Rothschilds giraffes with the installation of CCTV cameras inside the animals’ overnight stalls. 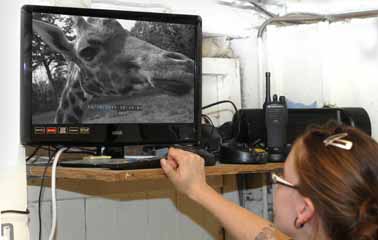 “It will also give us the chance to see other things that would go unnoticed.

“I had been working with the species for about ten years before I saw a giraffe lie down, because it’s something they do only at night.

“It will also mean we do not rely on assumptions; if we see food isn’t being eaten, it can be difficult to work out which giraffe has stopped feeding, but the cameras will help us identify the problem.” 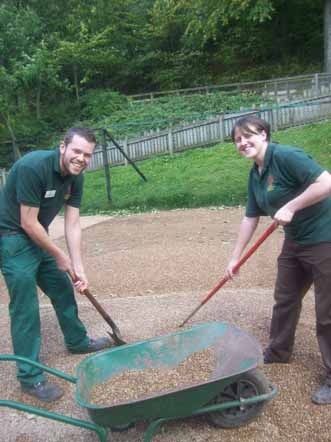 In addition to the new cameras, the giraffes are benefiting from 20 tonnes of grit which has been spread around the external enclosure.

Matt added: “The grit is good for their hooves and replicates the type of ground they walk on in the wild.”

LEFT: Jay Haywood and Cerys Grove get to grips with the grit load.

Previous: Elliot’s in the frame
Next: Hallowe’en Hocus Pocus