We’ve welcomed a new female black lemur to DZG as part of a European breeding programme.

Five year-old Barbara has joined us from Bioparc Fuengirola in Spain and has moved into the Small Primate House with our resident 10 year-old male, Bryan, from Lemur Wood, where keepers are hoping the pair will soon breed. 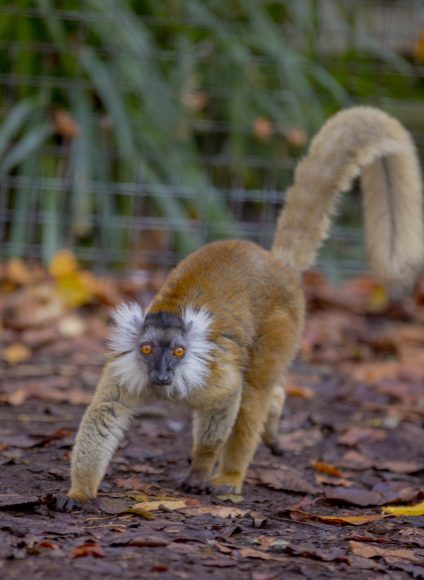 Black lemurs are a vulnerable species and DZG plays a key role in their conservation battle, as we’re the studbook holder for all the captive population in Europe.

DZG’s Curator Richard Brown manages the studbook alongside our Registrar and Research Co-ordinator Dr David Beeston, who keep records of more than 200 black lemurs in the European Endangered Species Programme (EEP) and make recommendations for exchanges or breeding pairs to keep the gene pool viable.

Richard said: “After making breeding recommendations for around 50 other collections, it’s nice to do one for ourselves. Barbara has settled in well and seems to have hit it off with Bryan almost immediately, so we’re very hopeful with the pairing.”

As part of the move, Bryan has been split from Florence, who has joined our other resident male, Kagani.

It is hoped Bryan and Barbara will soon move back to Lemur Wood, while Florence and Kagani will relocate to another animal collection.

Despite their name, only male lemurs are black. Babies are born with grey fur, with females developing their characteristic brown colour after a few weeks.