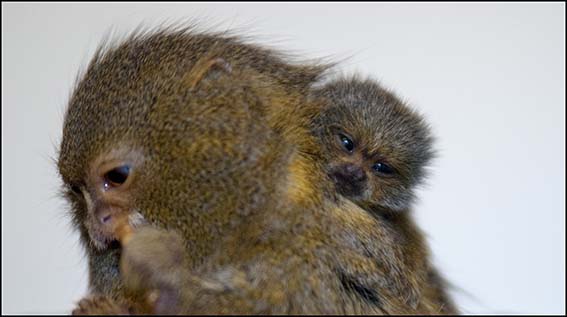 They are yet to determine the sex of the baby pygmy marmoset  the world’s smallest monkey  but came up with the unisex name because they keep seeing it dart about its home.

Zippy was born to mum Pam and dad Hendrix on June 19 and is doing very well.

DZG’s Head of Upper Primates, Pat Stevens, said: “The baby has been running about on its own such a lot so we decided on the name Zippy.

“For a youngster it is already quite independent but after a little while it screams out for mum or dad and they go and pick it up.”

The twins were born to Pam and Hendrix last October and were the first additions to a new breeding group.

DZG has always had great success at breeding the world’s smallest monkey species and Pam translocated from Dublin Zoo so Upper Primate Keepers could establish the new group.

Pygmy marmosets have fine, silky coats and long hairs on their cheeks and head, which form a mane that conceals their almond shaped ears.

Be sure to say hi to Zippy next time you are passing!