Two axolotls will soon be swimming in DZG’s Discovery Centre after being donated to us by a member of the public. 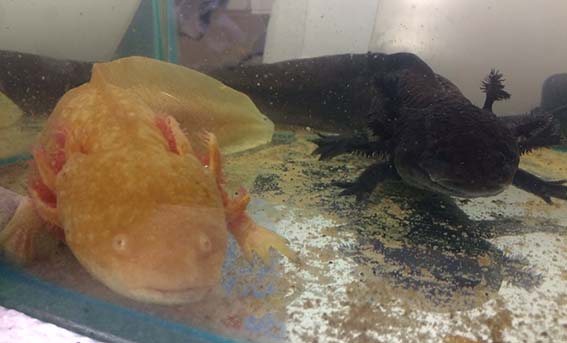 The creatures (pictured above), also known as Mexican salamanders or Mexican walking fish, are both boys named Goldie and Toothless.

Goldie is aptly named after his golden albino colour and Toothless, who is black or melanoid which is the natural wild colour, got his name from the dragon in the hit action-fantasy film How to Train Your Dragon.

Presenter Dorrie Hall said: “We are delighted to have axolotls joining us. Goldie and Toothless will be making an appearance in the Discovery Centre very soon.

“They are very popular pets in captivity, but in the wild axolotls are only found in Lake Xochimilco in Mexico and are currently listed by the International Union for Conservation of Nature as critically endangered.

“Demands of nearby Mexico City have led to the draining and contamination of much of the waters of the Xochimilco Lake.

“Roasted axolotl is considered a delicacy in Mexico, but most recently their numbers have suffered due to predation of their eggs and young by introduced fish species.”

The axolotl is a fascinating creature for a number of reasons, including its grotesque appearance, its ability to regenerate and primarily the fact that it exhibits the phenomenon known as neoteny.

Ordinarily, amphibians undergo metamorphosis from egg to larva (the tadpole of a frog is a larva), and finally to adult form. But the axolotl, along with a number of other amphibians, remains in its larval form throughout its life. This means that it retains its gills and fins and doesn’t develop the protruding eyes, eyelids and characteristics of other adult salamanders.

It grows much larger than a normal larval salamander and it reaches sexual maturity in this larval stage. The animal is completely aquatic and, although it does possess rudimentary lungs, breathes primarily through its gills and, to a lesser extent, its skin.

Keep your eyes peeled for Goldie and Toothless!

Previous: New roles for familiar faces!
Next: Like a kid in a sweet shop!