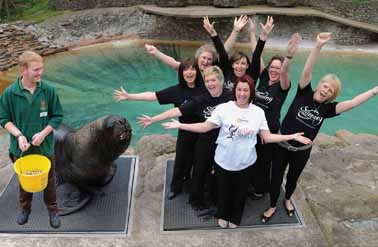 More than 100 Slimming World members attempted to shed a total of 100 stones during the three month period but had trouble visualising their combined weight loss until slimming consultant, Kerry Amos, hit on the idea of relating it in animal sizes and asked DZG for their assistance.   DZG?Head of Media and Communications, Jill Hitchman, said:?”Kerry asked if we had any animals that would represent a considerable weight on the scales, and the obvious choice was Orry, who weighs in at an impressive 405kg or 64 stones!    “We invited the slimming team to meet Orry and to hop on the scales to see just how many people were needed to balance our special weighbridge – there were seven members and they still came in at just under Orry’s size with their joint weight!   “While it may appear rather large in human terms, it’s a very acceptable weight for a sealion in his prime and is due to a balanced diet with lots of fresh fish.”   Kerry, of Slimming World, said:?”The group took part in a 12-week weight loss challenge in an attempt to lose 100 stone, which they successfully did. Throughout the challenge I let members know what their combined loss was in equivalent terms of animal weights and I?was delighted when Dudley Zoo helped us out.    “The team were so impressed by 20-year-old Orry that they have now adopted him.”   Jill added:?”Orry’s handsome physique is down to healthy eating and lots of exercise, and keepers make sure he jumps on the scales once a week to maintain that level.”   CAPTION: Orry and keeper Adam Walker weigh up the slimming team (back row, from left) Paula Perrins, Jayne Bloore, Amanda Lemon, Rachel Smith, Anne Woodard, (centre)?Jill Timmins and (front) Lorraine Magee.