Mysterious markings in Dudley Castle’s courtyard may look like aliens have landed! 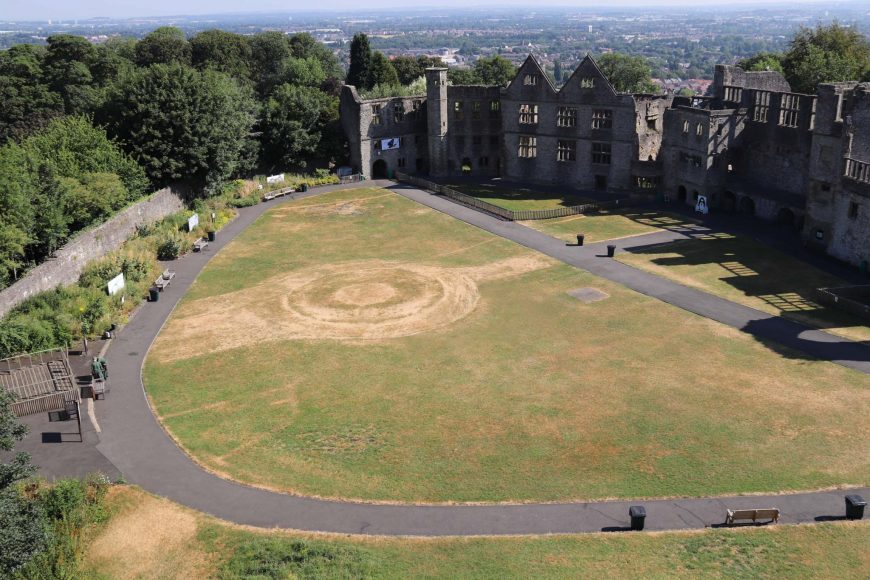 But our history experts explain the scorching sunshine has produced crop marks indicating where buildings stood as far back as the 16th century.

The long spell of hot weather has revealed prominent parch marks in three areas, revealing a wall line from the 1500s, an elaborate garden water feature from the early 1900s and a unknown building near the base of the keep.

Former Castle Keeper, Adrian Durkin, said: “I haven’t seen the wall line across the far end of the courtyard for about 30 years!

“The wall would have enabled food and provisions to be bought to the kitchen without having to go through the main courtyard and is probably John Dudley in date.

“The large circular feature in the centre will be remembered by some as a garden feature but for the rest it is, of course, where the UFOs land!

“But it’s the third marking near the base of the keep which is a real mystery. I’ve never seen it before, we have not excavated the area and I don’t know what it is.”

Our Education Assistant Amy Hickman, who runs Horrible Histories workshops and ghost walks, said: “We have seen some of these crop marks or parch marks faintly in the past, but they have never emerged so prominently.

“It’s all down to this exceptionally hot weather which is causing history to re-emerge. These markings are like footprints from the past.”

Want to delve deeper into our history? For our full programme of castle tours CLICK HERE.

Previous: Tongue-in-cheek
Next: Three reasons to be cheerful!