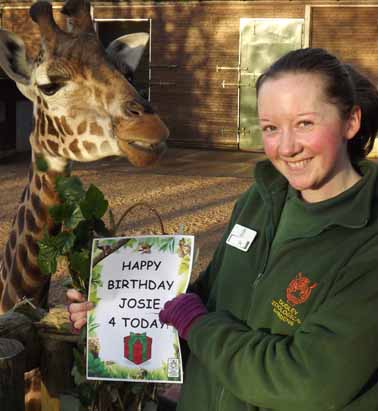 Keepers will be making sure Josie has lots of birthday treats throughout the day  come and say hello to her if you’re on site.

The subspecies, named after zoologist Lord Walter Rothschild, originates from Uganda and west-central Kenya and is easily distinguished by a coat of ragged brown patches separated by lighter coloured hair; each giraffe has a unique coat pattern.

A giraffe’s neck can grow up to 2metres in length and has seven neck bones  the same as humans.

Giraffes can gallop at up to 56 kilometres per hour to avoid predators!

Each giraffe has a unique coat pattern, rather like a fingerprint.

Previous: Luv a duck for Xmas
Next: Penguins in the picture