One of DZG’s most popular birds is celebrating her 21st birthday with a marathon radio tune-in. 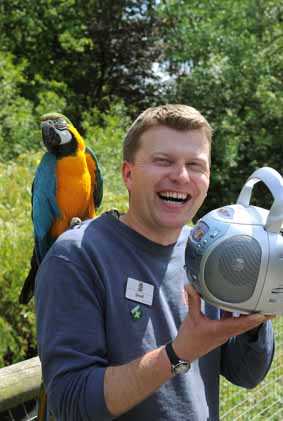 Blue and gold macaw, Charlie, loves listening to local radio stations in her home at the Discovery Centre.

Senior Presenter David Riley said: “Charlie enjoys pop, rock and classical music. If she doesn’t like what is on the radio, she will squawk the place down until it is changed to another station.”   Current favourites are local live radio stations, plus the occasional sports report. Previous passions included Classic FM and Radio Four’s Today programme, which prompted news anchorman John Humphrys to send her a signed photograph after learning of his feathered fan!   Charlie was reared in a private collection and transferred to Dudley in 1996. She is is seen by thousands of visitors each year and has become a firm favourite with adopters and members.    David added: “Macaws are sociable birds but Charlie grew up with humans, and thinks she is one of us so would not know how to relate to other macaws or be able to live with them. At 21 she’s a mere youngster, as the species can live up to 80 years of age, so it’s really important to think carefully before choosing a parrot as a pet.”   CAPTION: Who’s a pretty birthday girl:?Charlie with Senior Presenter David Riley.

Previous: Jazz in the Ballroom
Next: Luke’s designs have zoo theme