There are celebrations in the Small Primate House today for 10-year-old birthday boys, Nelson and Hardy, our red-ruffed lemur twins. 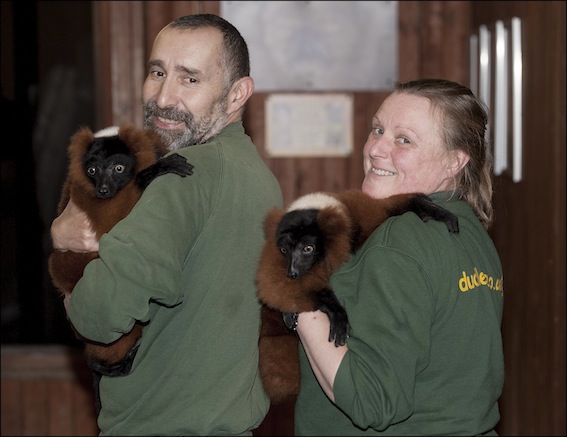 And first in the queue to wish them many happy returns were Upper Primates Section Leader, Pat Stevens and her husband, DZG Head Gardener, Carl – pictured above –  who played a very special role in the lemurs’ lives, after they stepped in to hand rear them shortly after birth.

Pat said: “Their mum abandoned them both within a few hours, so we made the decision to take them ourselves and hand rear them

“We ended up having them living at home with us for seven months, where they ran riot!”

The couple, who live on site, had to feed the boys every two hours, day and night, but they quickly outgrew their makeshift accommodation, starting off in a plastic ice cream tub and moving on to a large dog crate, They spent their early days playing in a spare enclosure before returning home each evening with Pat and Carl. 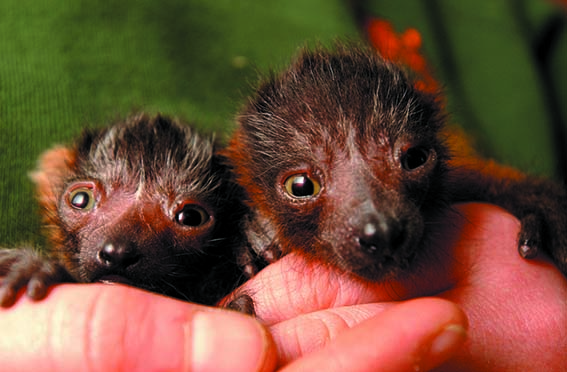 Carl said: “There was one incident that I’ll always remember at home when Hardy managed to climb up the door frame and onto the sideboard and planted his teeth into a pear.

“I picked up the pear, which was still attached to the lemur, shook it and it took some separating, so then we had to find a new home for the fruit bowl.”

During their time residing with the Stevens, the twins even enjoyed a trip to South Devon, when Pat and Carl took the lemurs with them during their annual holiday, where there were no shortage of babysitting offers from holidaymakers on the caravan site! 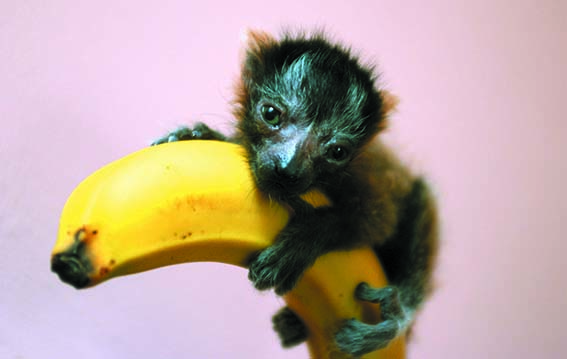 The twins now live in the Small Primate House full-time, after they became too boisterous for educational workshops and outreach visits, but the couple still have daily contact with their boys  who are always delighted to see them!

Pat added: “It makes us feel very old to think this all happened a decade ago, as it certainly doesn’t feel that long, but they wouldn’t have survived if we hadn’t have stepped in and they’ve grown up to become two lovely, but very lively, lemurs!”

Red-ruffed lemurs can live up to 30 years in captivity and around 15-20 years in the tropical rainforests of Madagascar.

Meet Nelson and Hardy in the video below…