Good luck to the 15 participants in our Arachno Workshop today! 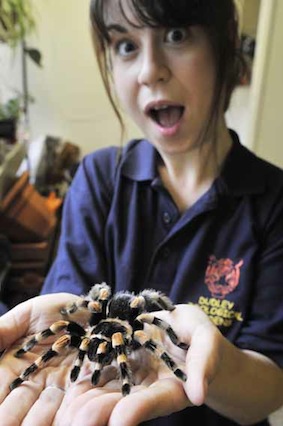 DZG’s Presenters will be encouraging the group to overcome their fear of spiders in the afternoon session in the Discovery Centre’s Rainforest Room.

The relaxed sessions aim to educate and introduce participants to the eight-legged creatures, before they are given the opportunity to try and touch one by the end of the event.

Our workshops have proved so popular over the years that the next session on April 6 has already sold out, with places now available for September 14.

Marketing Assistant, Andrea Hales, said: “We’ve been running the Arachno Workshops for more than five years and they prove so popular that we’ve had to add extra sessions.

“We run the workshops on a Sunday afternoon in March, April and September as that’s the time of year when spiders appear most in houses and gardens.

“After the sessions we get lots of positive feedback from participants who all say it helps them overcome their fears.”

Erica Lepnis, from Erdington, took part in the workshop in April 2013 and said it has changed her life for the better.

She said: “I was loading some builders’ rubble into my car to take to the tip, when suddenly the daddy of all spiders leapt out of the bag and into my car. It was massive, about the size of my palm and one of those big ones with thick, hairy legs. There was nobody I could call and I couldn’t leave it to go fetch a trap because if I had of lost sight of it I would never have been able to get into the car again.

“You are going to have to grab it,” I said to myself. I took several deep breaths, reached in (admittedly with a small shriek), grabbed it my gloved hand and threw it onto the floor. I did it! I cannot believe I could ever go so close to such a big spider, never mind hold it in my hand.

“I cannot believe that only one morning with you could have changed my life that much. I’m not exaggerating when I say you have changed my life, considering that women who came on your course couldn’t even look at a picture of a spider in a magazine.  I could never even enjoy my garden before because they were out there, now they can run all over me and I can just flick them off.

“I am so thrilled and relieved to have overcome my fears that I hope I can convince people that it is possible to overcome their fears by attending the session.”

For more information about the Arachnophobia Workshop and to book a place on September’s session click here.