A family day out at DZG took a spooky twist for Birmingham couple Dean and Amy Harper when they looked over images they’d taken of their visit to the castle courtyard. 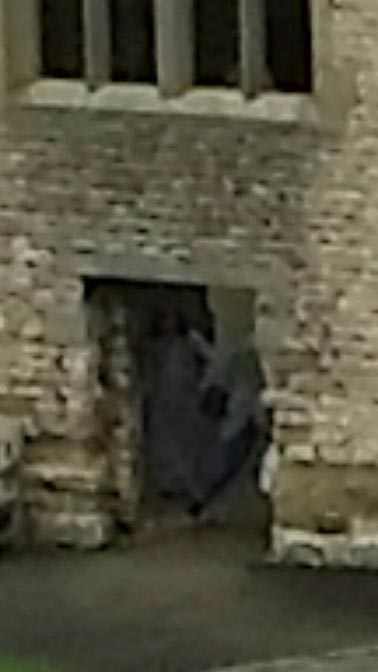 A shot of the Sharington Range Tudor palace, taken from the top of Dudley Castle tower, showed a red glow to the upper rooms and a ghostly figure in the archway beneath.   Dean said: “We had a lovely day as it was the first time we had been in a few years and saw some amazing changes.    “We went up to the top of the castle ruins and while we were up there we thought we would get some pics of the grounds.    “On looking through the images that evening Amy saw a glow, as though a light was on, on the top window level. On zooming in we noticed on the bottom, inside an arch, there was a lady and what appears to be a little girl, too.    “Neither of us are ghost hunters but we do wonder if this could be the Grey Lady ghost  the picture is quite clear.”   The image, on Amy’s mobile phone, was taken at 3.10pm on August 30.   Head of Media and Communications, Jill Hitchman said: “There have been many stories about ghostly figures and happenings associated with the castle, mostly centred within the courtyard.   “This image is incredible because it was taken from the top of the castle on a mobile phone camera and still manages to pick out the outline of what seems to be a female figure in the doorway.”   She added: “The archway leads directly to the Servery with the Kitchen to the left of the picture and the Buttery to the right  all areas that were the domain of men only in Tudor times.”