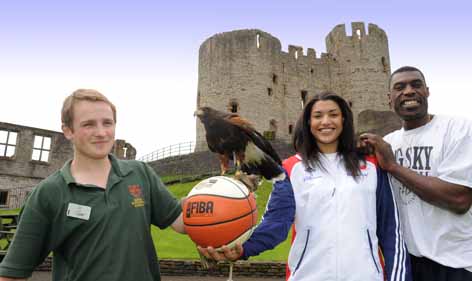 And special wishes for Dudley-born athlete, Dominique Allen, who will be representing Great Britain in the women’s basketball team.

She wore the Great Britain T-shirt at under-20s level in the 2008 and 2009 European Championships and also played for the GB Futures team in the World University Games in Shenzhen, China.

Sport is very much a family affair as dad, Clive Allen, played 15 seasons in the British Basketball League, primarily with Birmingham Bullets, and was an England International player.

CAPTION: Dominique and Clive say hello to keeper Luke Millar and bird of prey during a visit to DZG.

Previous: Let the games begin!
Next: Join our Summer Academy!