DZG has scooped a prestigious award in recognition of our conservation work with endangered native species. 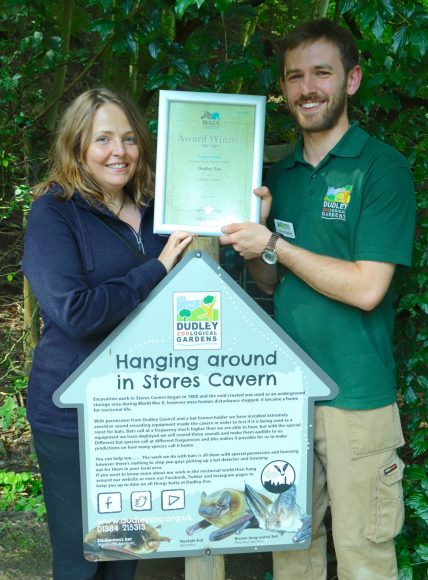 We received a Silver award for our Limestone Bat Project at the BIAZA (British and Irish Association of Zoos and Aquariums), awards, which celebrates outstanding achievements in the zoological world.

DZG Conservation Officer Chris Leeson, who heads the project in conjunction with The Birmingham and Black Country Bat Group, BrumBats, – pictured right with Brumbats Chair, Morgan Hughes –  said: “We’ve been trapping and recording bats in the zoo’s off-show Big Ben Cavern and Stores Cavern for the last two years and we’ve now got over nine species living on site, including the rare Lesser horseshoe bat, so we’re extremely delighted that our native species project has been recognised in the same category as projects involving the more popular animal species.”

The ongoing project involves using specialist detecting equipment to catch the bats, who are then measured and a DNA sample collected through hair clipping, so we can record and see if we come across the same bats again.

We’ll be continuing with surveys throughout this month, including our first ever overnight review of Big Ben Cavern.

Zoo Director Derek Grove said: “DZG has not only made a long term commitment to assist wildlife conservation projects across the globe, but we have always recognised the importance of working with native species and the appointment of a full time Conservation Officer back in 2016 has enabled us to participate further in projects for our local fauna and flora.

“With the location of the Castle Hill Woodland and Peggy’s  Meadow adjacent to the site, as well as the abandoned limestone mines underneath the zoo, we are able to provide a unique opportunity to monitor and undertake habitat management for a variety of the UK’s neglected wildlife.

“Receiving peer recognition from an organisation that represents over 100 wildlife conservation organisations has been warmly welcomed.”