As we continue to raise awareness for apes throughout April, focus today turns to our Lar gibbons. 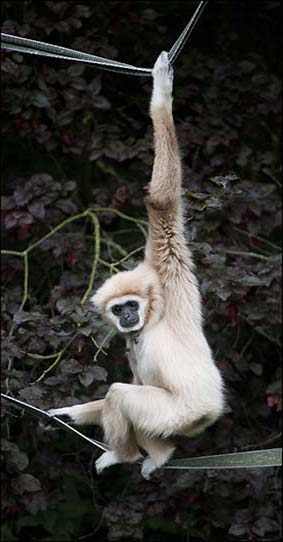 Here at DZG we have a family of four  dad, Huggy, mum, Meo and their offspring Penny and Indah.

Unlike chimpanzees, orang utans and gorillas, Lar gibbons are lesser apes but still boast large brains, rotary shoulder blades and no tail like their larger counterparts. They’re hairy all over apart from their ischial callosities or sitting pads, which great apes lack.

Like orang utans they populate Southeast Asia  primarily Indonesia, Laos, Malaysia, Myanmar and Thailand, but the species, which is listed as endangered on the IUCN list, is under threat in the wild due to habitat destruction, through forest clearance, illegal agriculture, tourism and forest clearance for commercial plantations of palm oil also poses a threat.

The species is also sometimes hunted for food and the pet trade.

Lesser apes are mostly vegetarian and will feed mainly on fruits such as figs as well as the shoots and leaves of various plants. But they will also eat insects and small vertebrates as well as bird eggs.

Their distinctive loud ‘whoop’ call can be heard up to half a mile away!

They pair for life which means that they live together in small family groups.

Their long arms and long hooked fingers which characterise the gibbons are used for movement through the tree tops by a hand-over-hand pattern known as brachiatio  they can bridge gaps of more than 10 metres. 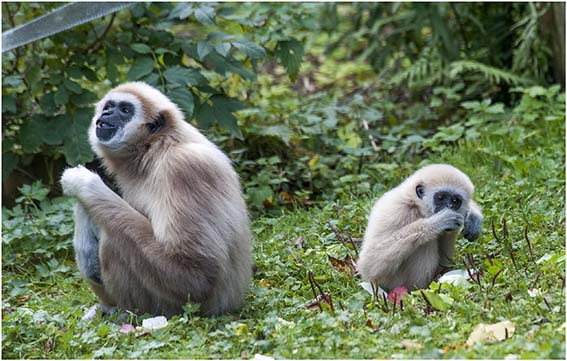 Previous: Radiographers Wake up the Zoo!
Next: Stacia’s DZG tour!