DZG’s giraffes were thrust into the TV spotlight as news broke that their iconic species is now sadly threatened with extinction. 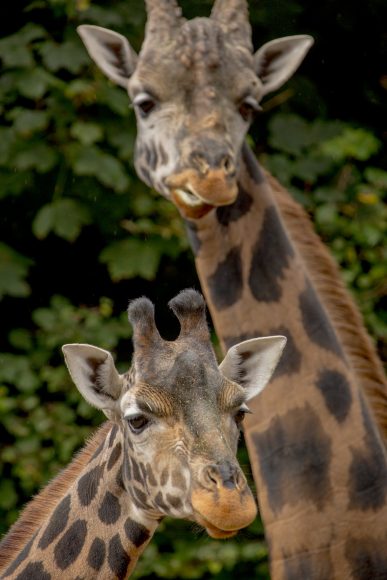 The International Union for Conservation of Nature (IUCN) Red List has regraded the giraffe as vulnerable following a devastating 40 per cent decline in numbers over the last 30 years, driven by habitat loss, civil unrest and illegal hunting in their native Africa.

And Sky News were live from our giraffe house where they interviewed Assistant Curator Jay Haywood about the reclassification before their reporter met Kubwa, Josie and Kito, who remain great ambassadors for their wild counterparts and are always firm favourites with visitors.

Jay said: “The IUCN Red List is the world’s most comprehensive inventory of the global status of animal species which strives to raise the profile of our planet’s at risk.

“The Red List has now re-classed all sub-species of giraffe from least concern to vulnerable, with wild numbers dropping from around 140,000 to 80,000 in 17 years alone.

“It’s unthinkable to imagine a world without these majestic creatures so it’s absolutely vital that we do all we can to help ensure the survival of these species for future generations.”

As part of the channel’s coverage, Jay appeared on the afternoon’s televised news bulletin, as well as taking part in a 20 minute live video on the station’s Facebook page, where he explained all about the species as a whole and our three giraffes, before taking part in a question and answer session with viewers.

Jay added:“It was fantastic for us to appear on such a national platform and highlight the threats giraffes are facing, as I don’t think that a lot of people realise that such a popular animal is threatened with extinction.”

Visitors can find out more about the plight of the species during our giraffe talk and feed, each day at 12.45pm at the paddock.

And watch Jay in action in the video below…