A new male Parma wallaby has arrived at DZG to join our four females as part of a breeding programme. 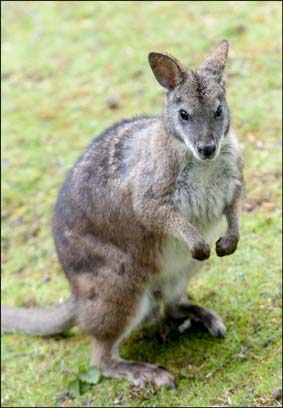 Four-year-old Alf translocated from Cotswold Wildlife Park and Gardens last month and is settling in well.

Section Leader Jay Haywood said: Alf has joined the other Parma wallabies in the enclosure opposite our tapirs and is getting on very well with his four lady friends.

Parma wallabies originate from the forests of New South Wales, which is in the south east corner of Australia, and are also known as white-throated wallabies.

It is the smallest of the Macropus family, the largest being the red kangaroo which is 10 times the weight of the Parma wallaby

Previous: Going batty for Castle Creatures
Next: Primates have a swinging time!