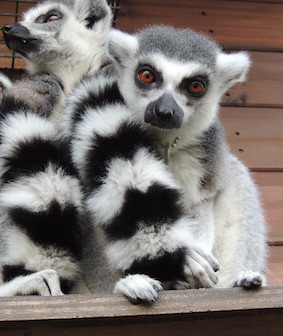 And Frank is one of DZG’s busiest fathers on site, living in Lemur Wood with his partner, Phoebe and seven of his eight offspring!

Upper Primates Senior Keeper, Sophie Dugmore, said: “We’ll treat Frank to a few raisins and bananas on his big day  as they’re some of his favourite treats.

“He’s enjoying life in Lemur Wood and has settled in really well with the rest of his brood.”

As well as his offspring  Itzy, Bitzy, Icarus, Kinich, Nelly, Kelly and Spock and partner, Phoebe, Frank also shares the Wood with the collard, black and black-and-white ruffed lemurs.

In the wild, male ring-tailed lemurs typically live approximately 15 years-old but in captivity their life span has been recorded as old as 27 years.