It’s not just DZG’s big cats who are enjoying the donated perfumes  our seven female chimpanzees have discovered a scent-sational playtime, too!

Following an overwhelming response to our online appeal for unwanted scents and aftershaves, including a large collection from HSBC staff in Edgbaston  big thanks, guys!  primate keepers have been trying out some of the fragrances on the chimp girls, with surprising results. 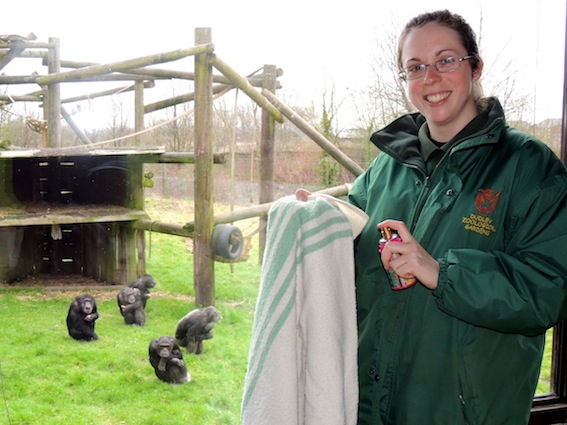 Lower Primates Section Leader, Nicola Wright, pictured above, said: “Unlike big cats who track smells around the enclosure, chimps are very much like us with similar senses, so will pick up on an aroma, which they’ll either like or dislike.”

Nicola added: “We noticed that the chimps were keeping the fragranced linen intact and pristine for longer than the others, which get worn out and destroyed very quickly.

“We also discovered one of the perfumed blankets was being kept folded up among the bedding, just like a child’s comforter, which we never expected to find.”