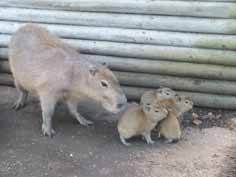 Keeper Laura Robbins, said: “It was a bit of a shock as we had a baby capybara born just a few months ago; now he has four brothers and sisters.”   The youngsters, who have not yet been named, are currently settling into the enclosure with the help of dad, Pumpkin, and older brother, Pecan.   CAPTION: Capybara mum, Peanut, with her four new arrivals.

Previous: Home from home for Harry
Next: Just 12 days to go!