Keepers have captured some wonderfully natural footage of two of our small primates foraging in a fig tree in DZG’s Monkey Tails walkthrough experience. 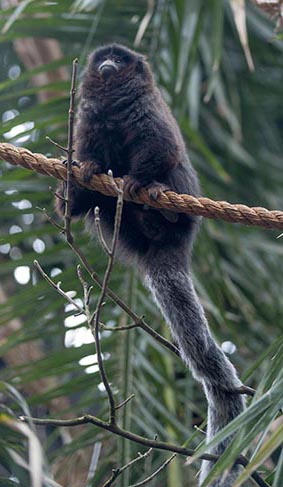 She said: “Foraging through the trees and eating flowers and fruits is exactly what these small primates would do in their natural environment.

“It’s always nice as a zoo keeper to see the animals behave how they would in the wild. It makes us feel we have set up the exhibits well.”

Titi monkeys Ross and his six-year-old son Frank arrived at DZG in February after translocating from Sweden as part of an international conservation programme.

It’s the first time we’ve held the species in our 78-year history.

COPPERY OR RED TITI MONKEYS are small South American primates found in Brazil, Bolivia, Peru, and Colombia. They are active by day and are truly arboreal, spending all their day in the trees. Much of this time is spent feeding on a range of fruits, leaves, bamboo shoots, insects and other small animals.

WHITE-FACED SAKIS are New World monkeys and spend most of their lives in trees, rarely going down to the ground. Their diet consists of berries and fruit, seeds and flowers, but they can also eat small mammals such as bats and mice.

See Ross and Rio feasting on flowers in DZG’s impressive Monkey Tails exhibit in our short video below.