One of DZG’s biggest expenses is food, and with 1,500 animals and 200 species on site that’s a lot of mouths to feed each day.

Our weekly food bill tops £2,300, that’s a mighty £120,000 per year, so every penny counts and the task of making sure we have enough of the right food for our animals is down to one man  DZG’s oldest employee, 70-year-old Bill Newton. 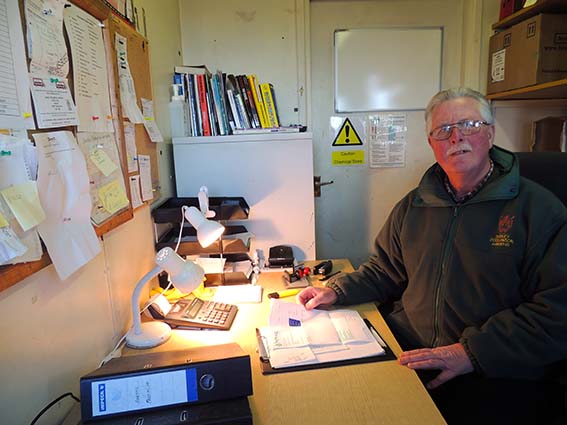 CAPTION: Bill Newton sorts through the many order forms to ensure DZG’s animals are all fed.

Working alongside curators, Bill and his team work hard to make sure our animals eat well, by sourcing only the freshest fruit, vegetables, meat and fish.

Storeman, Bill, who came to DZG 13 years-ago after retiring as an industrial works manager, said: “Our animals are very well looked after here and we’ll only ever give them the best, which means trying to source a lot of the food ourselves as locally as possible, so we know we’re getting the best food at the best price.” 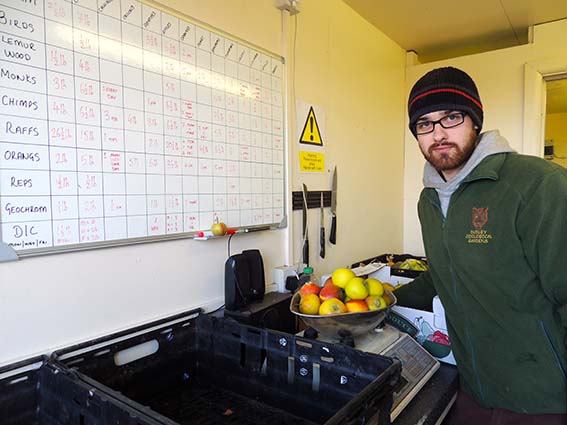 The store’s staff begin their day at 8am so that all the food can be ready for when keepers arrive to start their daily routines.

All the food is weighed and recorded before being delivered to the section kitchens around the zoo site, all year round, whatever the weather.

“We keep a matrix of each animal section and how much food they have each day” added Bill.

“We weigh all the fruit and vegetables out and box it up for each day of the week, so we can deliver that particular one that morning along with any fresh fish or meat they require.”

Curators and keepers regularly review animal diets to ensure each individual is getting the correct nutritional support, which can also affect Bill’s ordering.

Bill, from Swindon, Staffs, said: “Keepers fill out an indent each evening for their section’s food requirement for the next day. They pin it on a board in the main office at the end of the day, which we collect first thing in a morning and prepare and deliver to them. But they’ll always be an amendment or an addition during the day, which they’ll phone direct for. 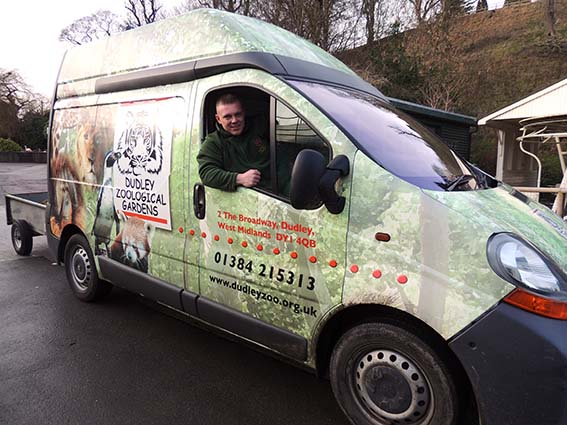 “The orders always vary day-to-day as to numbers, health changes and eating habits.

“But when I’m re-ordering I look historically at what each section has used for the last three months and calculate what we’ll need to see us through for the next few.”

PICTURED LEFT: Drew Jordan delivers the food to the sections each day in the zoo van.

With a vast selection of seasonal fruit and veg including apples, bananas, tomatoes, celery, and onions delivered twice a week, our animals certainly surpass their recommended five a day!

That’s in addition to more than a ton of freshly caught sprats, delivered twice a month from Poole, raw meat which arrives once a month and the quarterly deliveries of specialised dry food and graze mix, which all need to be organised on a rotation basis around best before dates. 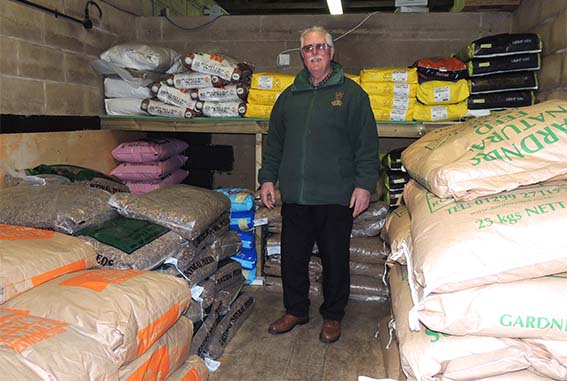 CAPTION: Bill Newton piles up a new delivery of dry food in one of the zoo’s stores.

Not forgetting the regular order of fruit flavoured baby food, nutritional drinks, multivitamins and cod liver oil from Boots which also needs to be dispersed around the

Previous: Reptile Encounters introduced
Next: Thanks fir the donation!