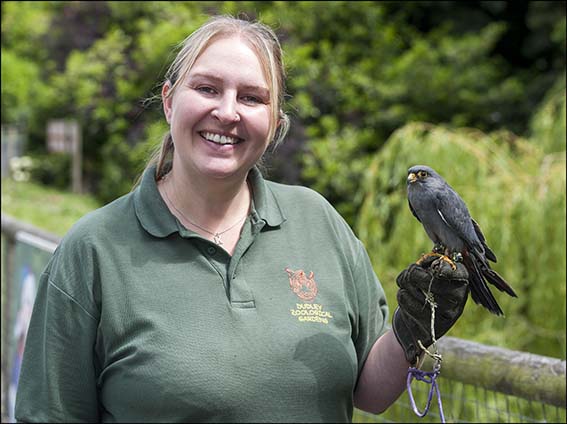 Blue, a western red-footed falcon, and Ruby, an American kestrel, arrived at the zoo recently and have started training to become new stars of our 12 o’clock daily shows. It’s the first time Dudley Zoo has held both species.

The pair are still learning the ropes and it will be a month or two before they join the flying squad but Head of Birds Kellie Piper, pictured above with Blue, said they were both making a promising start.

The falcon was called Blue after the colour of his feathers and the species get their name from the red legs and feet they develop as they mature. 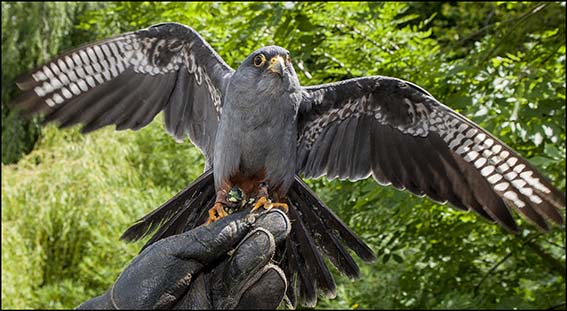 ABOVE : Red-footed falcon Blue looks set to be a real high flyer

Kellie said: “Blue has just started to fly between 10ft and 15ft to the fist and is coming along nicely. His flying weight is around 120g and eventually he will join in with the daily displays.

“In the wild these birds, which are insect eaters, are threatened by the loss of their habitats caused by deforestation and the use of pesticides.” 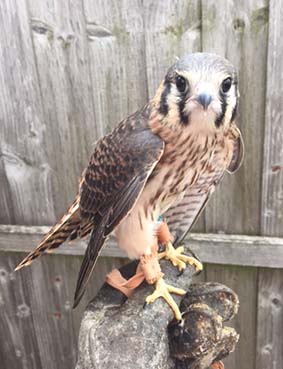 Two-month-old Ruby, pictured left, is getting used to being handled and being around people and should also join the flying team and be flown by DZG Keepers for a Day.

Kellie added: “We call it manning’ when we get birds acclimatised to their surroundings and that means all sorts of things here at the zoo, including pushchairs, umbrellas and balloons.

“Ruby is only tiny but she is starting to become familiar with all these objects.”

Americans are the smallest of the kestrels and feed on insects, small mammals, grasshoppers, mice and small birds.

Keep an eye out for our new additions, Blue and Ruby, over the next few weeks.

It won’t be long before they’ll be flying high in the Castle courtyard during our midday displays!

Previous: You can count on DZG!
Next: A roaring success!