DZG’s ferrets will be cosy in their cages thanks to some old lino donated by new Presenter Heather John’s mum! 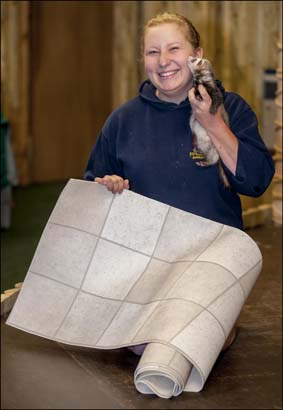 When her mum was having a clear out Heather bagged the flooring and brought it to DZG to line the new ferrets cages and make them easy to clean out.

Presenter Dorrie Hall, pictured right with seven-year-old Shadow, said: “It was actually quite a coincidence as Heather and I had only been discussing a few days before about lining our new ferret cages and then she brought in the lino.”

Ferrets are the domesticated form of the polecats, which live in the wild throughout many parts of Europe.

They are very popular pets in the UK – with them currently being rated in the top 10 of common pets.

Ferrets are very intelligent and many owners take them for walks on harnesses and leads.

They are also still used for hunting such as rabbiting or ratting, which is one of the original reasons they were brought to England by the Normans after the Norman Conquest of 1066.

Dorrie added: “Ferrets were helpful in driving the rabbits out of their burrows to catch up and eat, so it is very likely that ferrets would have been living here in Dudley Castle.”

Previous: Yasmins a grandma!
Next: The pitter patter of peafowl