Seven flamingos are staying indoors today after high winds threatened to blow them off site! 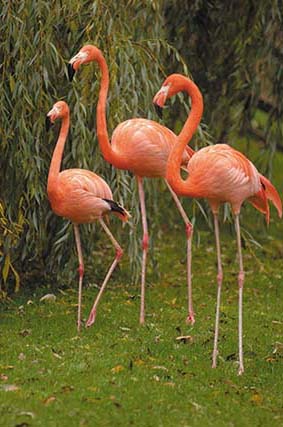 Keepers were concerned that the leggy lightweights, who weigh in at between 2.5kg and 3.5kg, would be swept away as the stormy winds picked up speed across the zoo’s 40-acre hillside site.

DZG CEO, Peter Suddock, said: “We’ve been monitoring the winds over the past few days and kept the flamingos in on Saturday, but let them out again yesterday as the weather was a little kinder, however, today it’s extremely blustery and we’ve made the decision to keep them indoors.   “Although their wings are clipped so they cannot fly they are still able to glide, so we decided to keep them in their internal enclosure until the winds die down.”   Elsewhere across site speeds of up to 40mph were recorded and access to the keep area of the 11th century Dudley Castle was cordoned off to visitors.