Seven flamingos were grounded today after high winds threatened to carry them away! 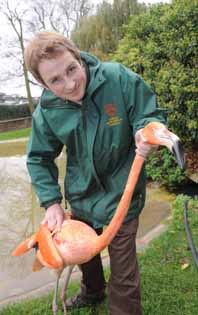 Keepers were concerned that the birds would be swept off as stormy winds picked up speed across the zoo’s 40-acre site.   DZG CEO, Peter Suddock, said: “At one point the winds got up to about 30mph and although the flamingos’ wings have been clippped so they cannot fly, they are still able to glide and for this reason we made the decision to put them in their internal enclosure until the winds died down.”   Catching up with the leggy lightweights, who weigh in at between 2.5kg and 3.5kg and can outrun a human, proved a trying task.   Curator, Matt Lewis, said: “They are really difficult creatures to catch up and can give a nasty peck if you don’t get it right; their beaks are very powerful, rather like a swan’s and leave a deep bruise.   “The best approach is to corner them and then move them by putting a hand around their neck and another across their body – and believe me, that’s much easier said than done!   “It took three of us about half an hour to get them all in the internal enclosure, and to ensure their safety we left them in there for the rest of the day.”   Elsewhere across the site speeds of up to 45mph were recorded and access to the keep area of the 11th century Dudley Castle was cordoned off to visitors.   CAPTION:?Keeper, Luke Millar,?rescues one of the site’s seven flamingos from the stormy winds.

Previous: Chairlift’s anniversary refurb
Next: Such a pane!