We’re marking the fifth anniversary of our re-launched chairlift today!

Following a £117,000 Heritage Lottery grant, we re-opened the passenger-carrying aerial ropeway on August 24, 2012 after being out of use for more than a decade and it’s remained as popular as ever. 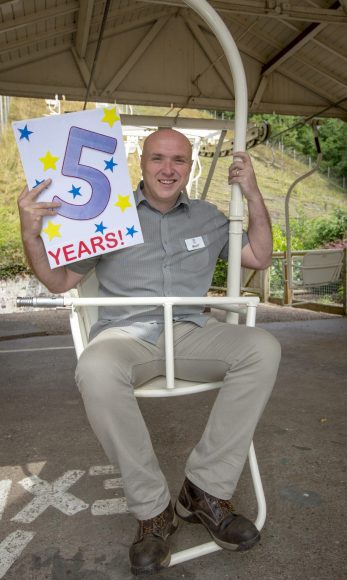 “Over the next ten years we had lots of comments from visitors recalling their memories and asking if it would ever come back and following the successful lottery grant we were delighted we could re-introduce a whole new generation to the gentle two-minute ride – and we believe three quarters of our height-compatible visitors choose to use the chairlift during their DZG day out.”

The ride, which transports visitors from the zoo’s entrance, over the Sulawesi crested macaques and gelada baboons to the top of the zoo site, flies for the majority of the year, but grounds over the winter months for annual safety checks and inspections.

Previous: Explore the ravine
Next: Bird of prey day