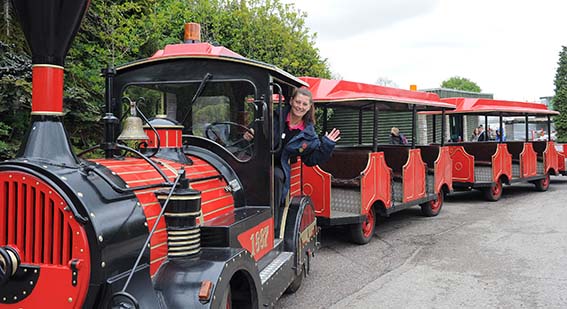 Sally is a familiar face at DZG since she first began volunteering three years ago, but she has passed all the rigorous train driving training and tests with flying colours and can now be found behind the wheel of the much-loved locomotive every Sunday.

Sally, from Cradley Heath, said: “It was a bit overwhelming at first being in a very male dominated environment and I do get the odd quips about women drivers, but I am very proud to be Dudley Zoo’s first female train driver.

“It’s quite difficult to drive as it’s completely different to driving a car, but I am enjoying it and it’s great to see the children’s reactions to the train as they all love riding on it.

“I’m also having to get used to having my photo taken quite a lot, as children want to be pictured with me and the train.”

The red locomotive makes frequent trips up and down the steep Castle Hill transporting children, parents, buggies and baggage and is as popular now as it was when it was first introduced on site 25 years ago.

Made in Italy the vehicle has two carriages and can carry up to 40 children or 30 adults for each journey.