A Black Country comedy team headed to the top of Dudley Castle to grab some publicity shots ahead of their stint at the world famous Edinburgh Fringe Festival. 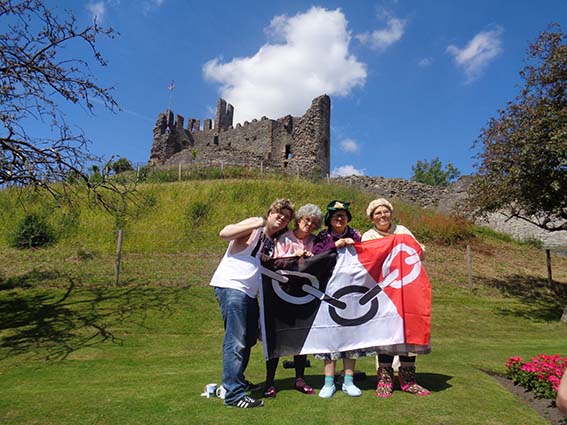 ABOVE: Fizzogs Sue Hawkins, Deb Nicholls and Jacky Fellows at Dudley Castle, along with honorary group member James Collins who will be performing with them at Edinburgh

Following on from their success at the Black Country Festival, members of Dudley-based Fizzog Productions will be performing in Edinburgh tomorrow, August 7, until August 13.

The group, made up of friends Sue Hawkins, Jackie Fellows, Deb Nicholls and Emma Rollason, will perform extracts from their highly-acclaimed Fifty Shades of Fizzog’ show and plan to get another photo taken at Edinburgh Castle with some of our Dudley Castle souvenirs.

DZG Sales Manager Isobel Blackwell said: “It was a pleasure to have the Fizzogs on site as they prepared to take their show to Scotland.

“It is also great they will be spreading the word about the Black Country and the 11th century Dudley Castle after we gave them some Castle souvenir mugs so they can enjoy a cuppa on their journey.”

The Fizzogs dancing grannies routine was an internet sensation on YouTube and Facebook last year and went global with around 1.6 million shares.