Dudley Castle provided a fairytale backdrop for panto star, Niki Evans, when she dropped in to say hello to staff. 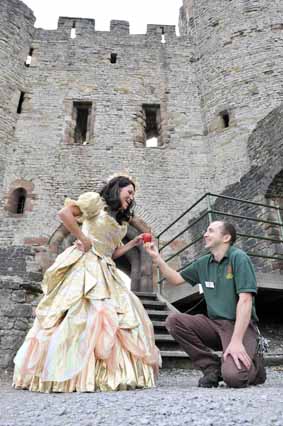 X-Factor singer, Niki, is set to play The Fairy in Snow White and the Seven Dwarfs at The Grand Theatre, Wolverhampton and when she heard DZG will be sponsoring the December 9th dress rehearsal, she called into the Castle Hill site for a chat.

Niki said: “I used to visit the zoo regularly when my children were small, but I never imagined I’d be back as a fairy!”

And this year our Santa’s Grotto will continue the fairytale theme, with a Magical Winter Wonderland complete with Snow White’s Castle!

CEO Peter Suddock, said: “We are delighted to be teaming up with a premier theatre that’s on our doorstep and hope everyone will enjoy Snow White at The Grand and Snow White’s Castle at DZG.”

DZG’s Winter Wonderland runs from December 5 to Christmas Eve and includes a magical train ride and show, plus a chance to see some of the rarest animals in the world. 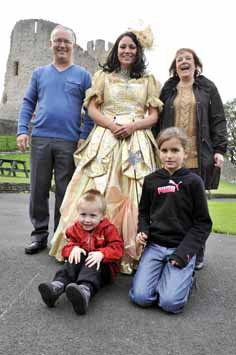 CAPTIONS: TOP: Niki Evans, who will be playing The Fairy in Snow White and the Seven Dwarfs at The Grand, Wolverhampton, accepts an apple from DZG Assistant Curator Richard Brown.

RIGHT: Niki says hello to John and Margaret Watts, of West Bromwich, with their grandchildren, Morgan aged 3, and 10-year-old Jade, a pupil at Priory School, Dudley, in the courtyard of the 11th century Dudley Castle.